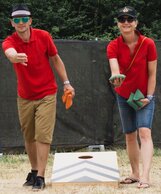 Each player stands on one side of the board and throws the bags on the opposite board. The bottom of the platform forms the foul line.

The points are counted once all the bags are thrown. Only the winner takes the points - scoring is done by score cancelation.

In the hole 3 points, on the board 1, outside 0 points 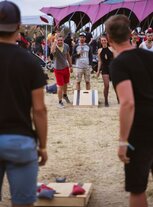 Teammates stand opposite each other. The players start at the first board (opponents) and throw on the second board from which their teammates (opponents) throw back.

Players agree on what distance they will throw (officially 8m) and determine by lot which one will start with the first throw.

The game is played on individual rounds, in which points are calculated and added to the total score of the game.

Players take turns throwing bags until everyone throws all 4 bags of their color (one round of play).

If a bag ends on the board, which is bounced to the board from the ground, the bag is removed from the board immediately after the throw.

In individual rounds (ie after dropping 8 bags), only the player who won the round will add points by means of cancellation scoring (adding a point difference to their total score - for example, player # 1 tossed 5 points in total and player # 2 tossed 3 points: (5-3 = 2) player # 1 earns 2 points and the players prepare for the next round. In case of a draw, no player will score points in the round.

The play continues until a player reaches or exceeds the total score of 21 points.

Since the points in each round are only attributed to the winner of the round, the game can never end in a draw and one player always reaches or exceeds 21 points.


Official rules according to czechcornhole.cz: